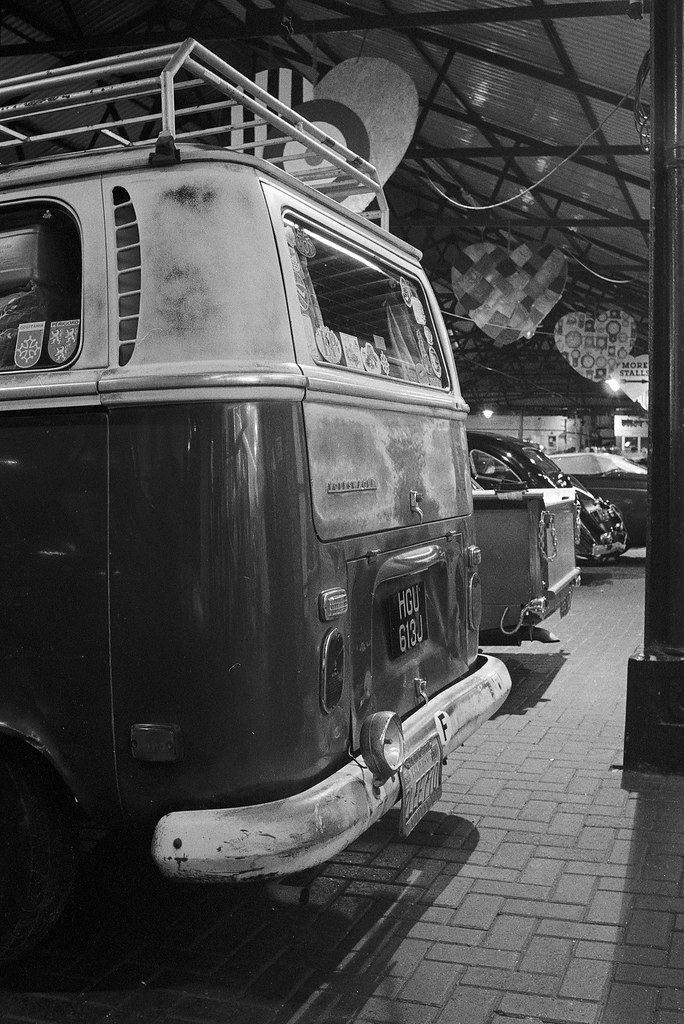 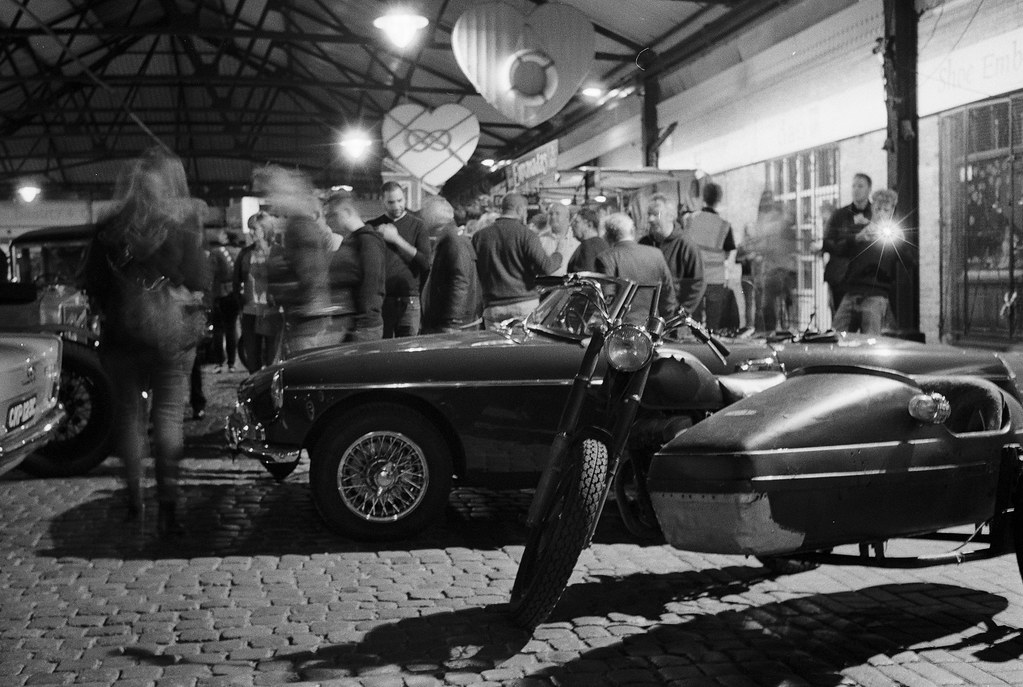 There is a classic car club that meets in the local market place once a month and it’s started to become quite the occasion. The market is packed with beautiful cars and bikes, there are vintage bands playing, food and drinks available and crowds soaking up the party atmosphere. It makes a perfect place for shooting and I think this shot nicely sums up the hustle and bustle of it all. 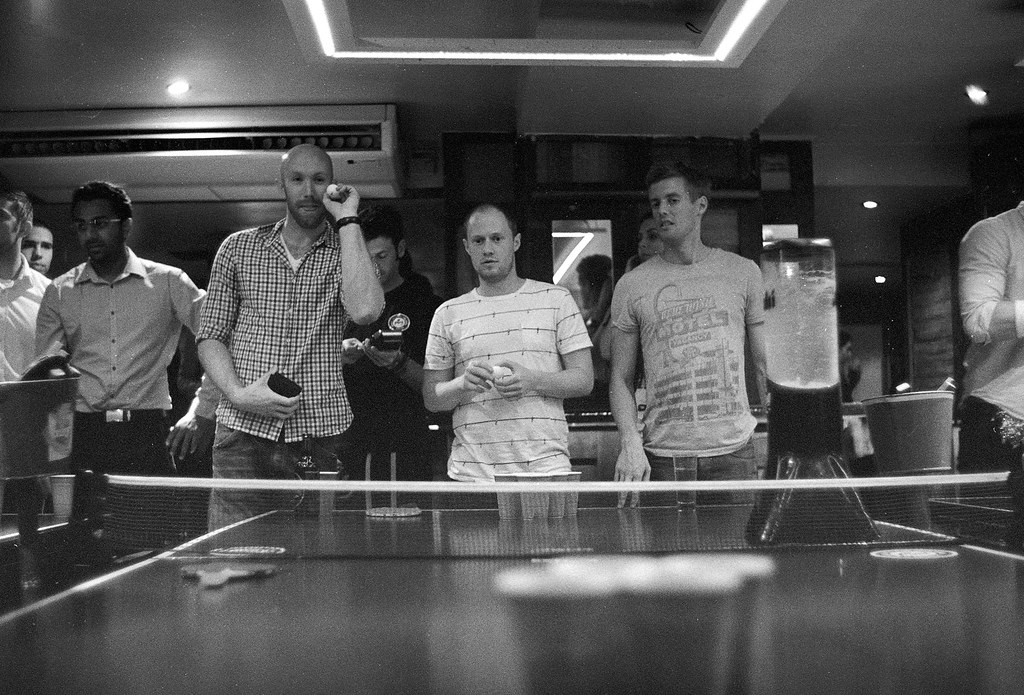 I’ve picked this shot because I feel it achieves a cinematic look. It’s a look that I love and that I wish I could pull off more often. As far as I can tell the key requirements are shallow depth of field, foreground objects as well as background and inclusion of other secondary subjects. Sounds simple enough but it just seems to tricky to get it to all fall in to place!

Any advice would be more than welcome via the comments below! 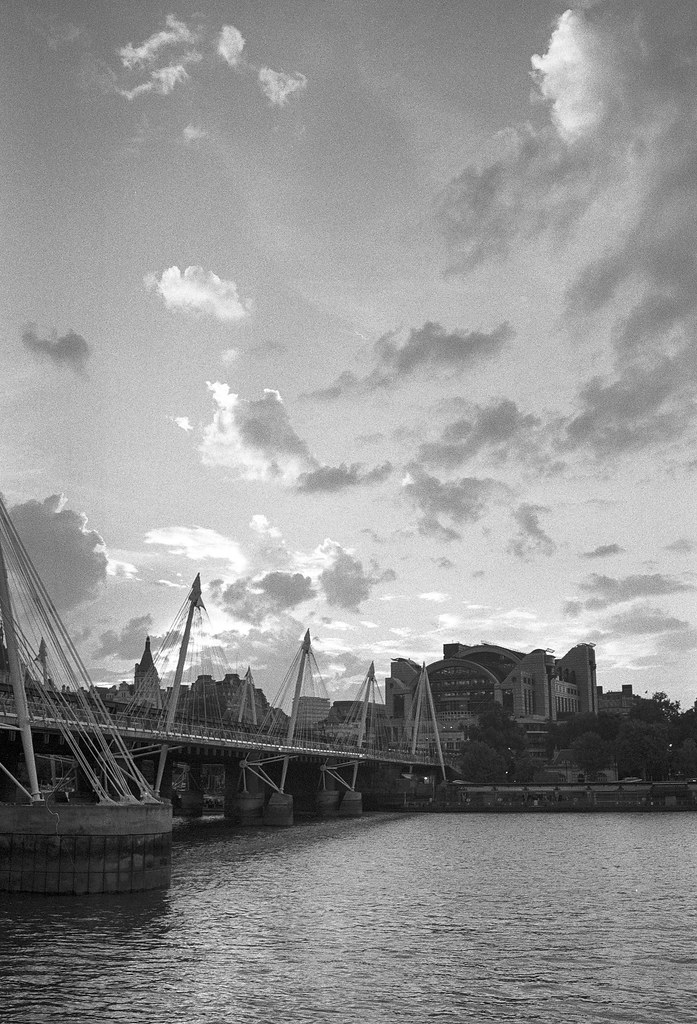 Sunsets are quite tricky to capture in black and white but I think this one works, helped significantly by the deep orange filter I used while shooting it.

With that, this roll draws to a close. Guess I better get my backside in gear and develop the next one! 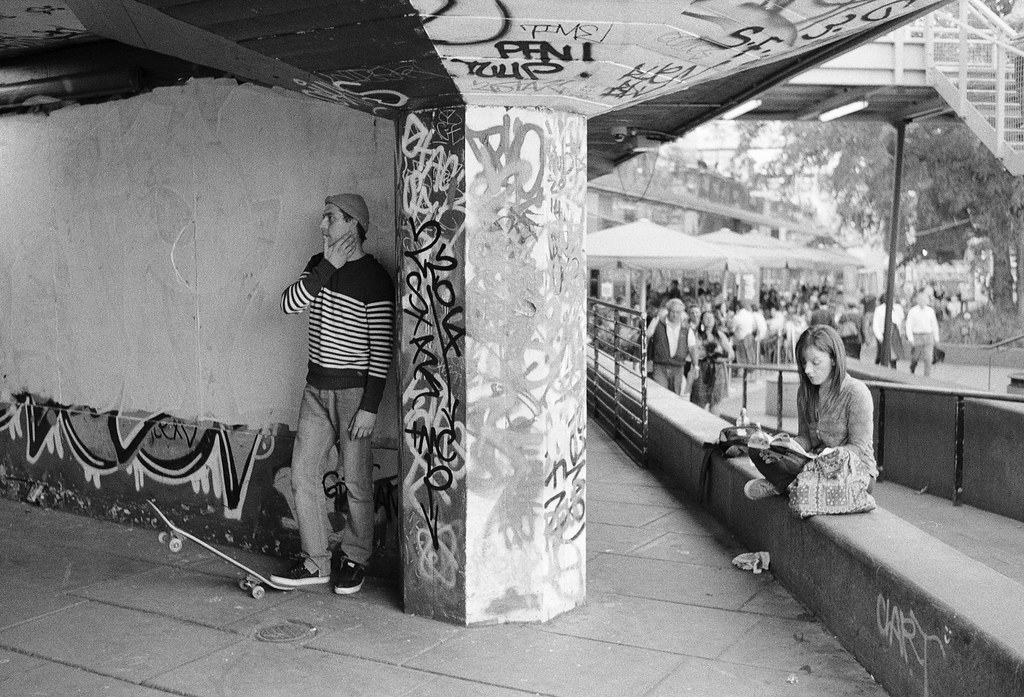 I loved watching these two. It might not show from the photograph but they were indeed a couple. He was skating the Southbank undercroft while she sat contentedly and read. Every once in a while he’d pop over to her or she would smile at him and then they’d return to what they were doing. Both perfectly happy and both obviously each others equals (despite their differences).

I’ve just finished shooting another roll and it’s certainly going to be an interesting one. It has all been shot in low light (surprise surprise) but the unusual thing is I didn’t go above ISO 400. It all started when I went to play ping-pong with some friends and decided to try out my new flash in to freeze the action. All seemed to be going well until the flash got caught on the table and broke!

That left me with a comparatively slow film in the camera for the amount of light in the bar, but I made the best of it using wide apertures and slow shutters – fingers crossed time!

The rest of the roll I finished off tonight at a local car show. I dragged my tripod for the first time in the while and took some long exposures to finish off the roll (plus a few hand-held shots). Whether the motion-blur of the people ends up working artistically though remains to be seen – fingers crossed again! 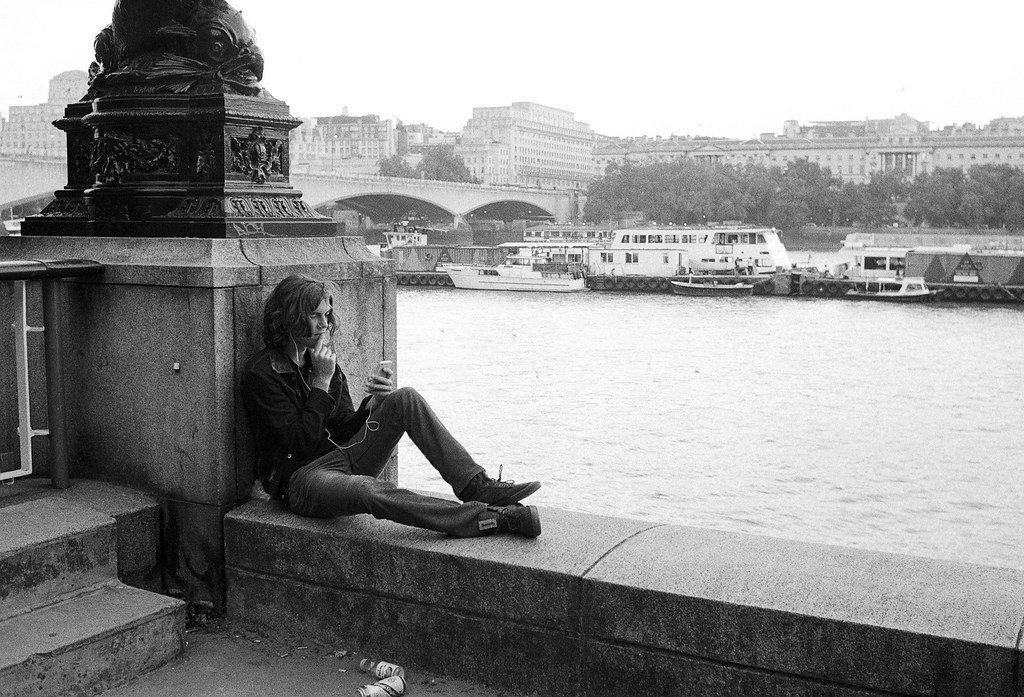 Sometimes you encounter somebody who stands out, not because of what they look like or what they are doing but because of what they are not doing. Take this young lad for example – In the middle of a busy city he’s not rushing around like everyone else but more importantly he’s not waiting for something either, there is no tension there, no clock watching. He’s just happy to exist and let the world flow past. 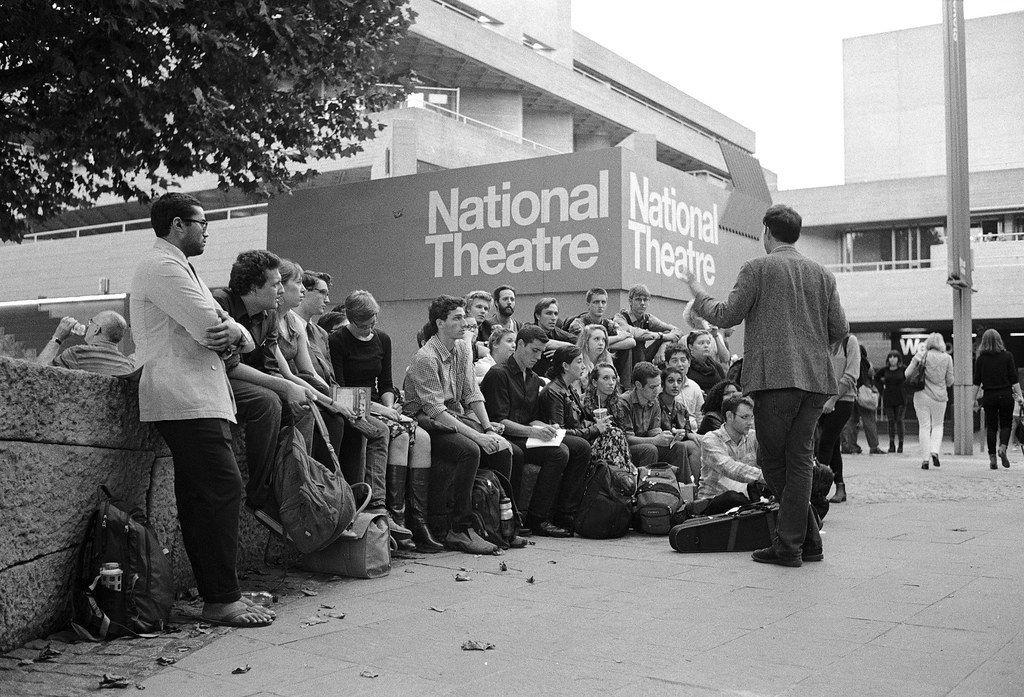 Funny how little details can make a shot work. This just wouldn’t be the same without the “National Theatre” logos in the background. 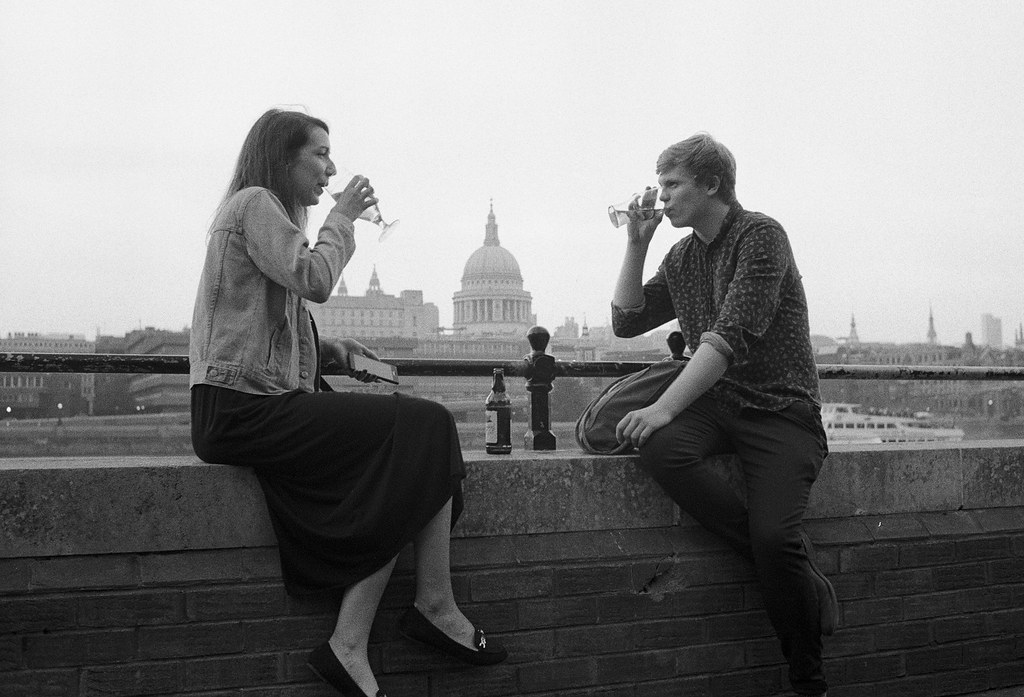 Another nice coincidence for today, I spotted this couple sat on the river wall framing St Paul’s Cathedral in the background. A small adjustment and a couple of steps closer made it nearly perfect, just a shame I caught her pulling a face! 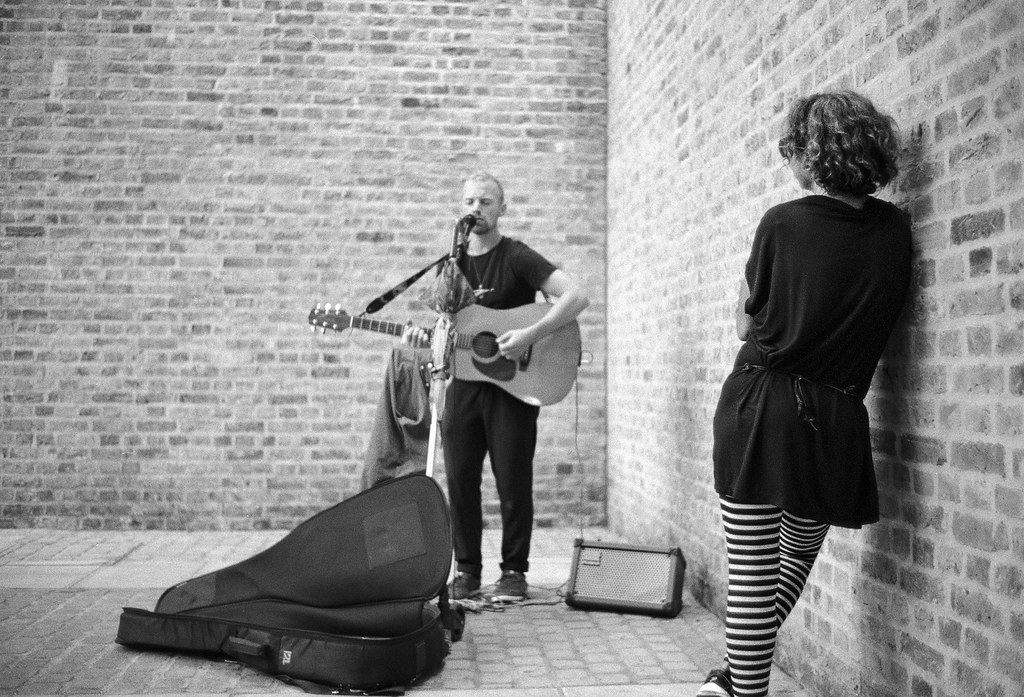 I absolutely love this shot, but very nearly missed it. As I walked under Blackfriars Bridge I saw this busker playing and lined up what would have been a nice enough shot. Then out of the corner of my eye I spotted his girlfriend watching. A small change of position on my part brought her in to the shot and a quick re-focus gave her emphasis as the subject – now the picture tells a story.

One Camera, One Lens, One Year
Blog at WordPress.com.